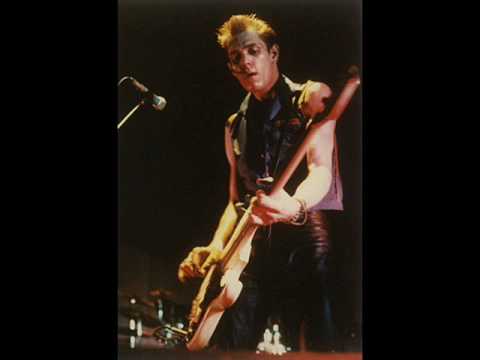 Born in Brixton, England in 1955, Paul Simonon was a student at London Art College when he joined The Clash in 1976 at the insistence of guitarist Mick Jones. Paul immediately realized that he enjoyed being on stage playing in front of people much more than painting alone in a studio.

Simonon is credited with naming the band as well as cultivating their look and stage designs. The Paul Simonon bass sound incorporated his love of reggae and ska. And, since he was still learning to play the bass as The Clash were forming, the simple and direct bass lines he created became a major aspect of the early punk sound of this iconic band.

After fiddling around on guitar for a while, he switched to bass because he found guitar too difficult to play. Paul quickly started to learn to play bass guitar with a little help from Mick Jones.

Early days of The Clash

When The Clash hit the new music scene in London, they had an immediate impact on punk rock. Their mix of frantic speed, powerful, angry political lyrics, and tight musicianship set them apart from the hoards of other punk bands at the time. For most of their career, the band consisted of four members: Joe Strummer, Mick Jones, Topper Headon, and Paul Simonon.

Even while he was still learning his instrument, Simonon was on stage playing live within six months, sometimes with little stickers on the neck to help find the right notes. Growing up in Brixton with its large West Indian community exposed Paul to Reggae and Ska. He became a huge reggae and often played along to reggae and dub records because he could more easily hear the bass lines. The protest mentality of the songs and the fact that they made you move and think were important factors for Simonon as well. He often called Reggae “the musical newspaper of the city.”

The Clash practiced relentlessly, and Paul’s bass playing improved by leaps and bounds. The band experimented constantly, with all four members contributing to songwriting and musical ideas. Paul has said that he always thought of the Clash as a conceptual art project and that they always wanted to explore new forms and not repeat themselves.

Paul first started out playing a Rickenbacker but found its sound too thin. He then quickly switched to a mid-70s Fender Precision Bass, which offered more bottom end and a stronger tone. Paul preferred using heavier model Precisions that he believed sounded better and could take all the abuse he dished out on them night after night. His P-Basses were usually white, and he often adorned them with stickers, abstract paint jobs and roughed them up a bit to give them some individuality. He also reasoned that no one would want to steal his basses if they were bashed up and hand-painted.

Paul frequently swung the instrument around onstage, and after a two-hour show would often have serious problems with his shoulder. Strung low by his knees, he normally played with a pick, sometimes using his fingers for reggae-style tunes. His style evolved from simple root-fifth punk lines to a more complex and intricate style, incorporating rock, reggae, ska, pop, funk, and other elements that set him apart from most other punk bassists of the day.

By the time the band recorded London Calling, Paul had become a complete bass player and was now coming up with most of their bass lines. This is the album where you can really hear Simonon stretching out and pursuing new and challenging musical ideas. The Clash released Sandinista! in 1980, a sprawling triple album that covered just about every genre of music, with Simonon contributing some awesome bass lines and songwriting.

Paul also wrote a few songs for the Clash, his most notable being “The Guns of Brixton” which he sang on. He is also the subject of one of the most iconic rock images. The photo of Paul smashing his Fender bass, taken by Pennie Smith, wound up on the cover of London Calling. Simonon has said that he later regretted that act, as that was his best playing bass. Simonon’s bass playing was instrumental in forming the Clash’s sound. He could anchor a song, drive the beat, or even carry the entire melody. Simonon was truly not only one of the great punk bassists, but also one of the most innovative bass players of his era.

After only six albums, the Clash official disbanded in 1986 due mostly to musical disagreements between Strummer and Jones. After the Clash, Simonon formed his own band, Havana , which released two albums before they called it quits. Paul then left the music business to return to a career in art. He returned to music in 2006, playing on the Gorillaz album Plastic Beach along with Mick Jones, and has played with the band The Good the Bad and the Queen. Paul and Mick are currently working on a film about the recording of the album London Calling. We can only hope he continues to make music and pump out those awesome bass lines.