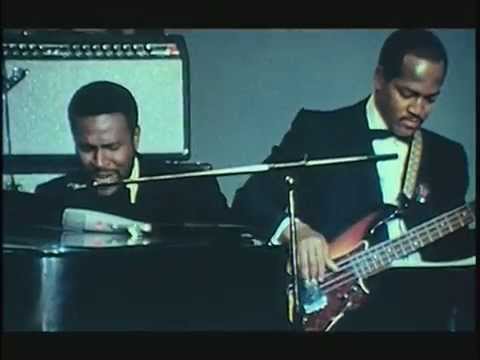 There’s so much myth and mystery around the brilliant Motown bassist James Jamerson that it’s sometimes hard to know who he really was. Thankfully though, we have his amazing basslines to listen to, and for many bass players, these recordings are a sort of sacred archive. They represent the beginnings of modern bass playing and the creative output of a musical genius. The influence of the James Jamerson bass catalog can’t be overstated.

Before Jamerson, almost all bassists would just play a simple root-fifth pattern or walking line. You might hear an octave or third now and then, but complicated lines weren’t common yet. The bass player was basically there to keep time and outline the melody, and usually not much more. James Jamerson changed all that, and he did it over a ly short period while working for Motown Records.

Born in South Carolina on January 29, 1936, James Jamerson grew up enveloped by the sounds of gospel, jazz, and the blues. We know from history that this can be a recipe for something amazing in terms of music. James had an instant affinity towards music, and he gravitated very quickly to the bass. He even made his own homemade “stick bass” and began playing along to records.

In 1953, his family moved to Detroit, and he started playing double bass in high school. It soon became apparent that he had immense talent, and James started to get work at jazz and blues clubs, honing his chops during late-night jams.

After being noticed playing at a Detroit rhythm and blues club Jamerson started doing session work for Motown records in 1959. Soon after he was hired on as the house bassist and became part of the now legendary “Funk Brothers.” During this time, James was still playing the upright bass, and most of his bass lines were pretty conventional. Although by this time, he had already developed great tone, and his timing was perfect.

In 1961 a fellow bassist by the name of Horace “Chili” Ruth urged James to try out a Fender Precision electric bass. At first, Jamerson was reluctant as many bass players during the era didn’t take the new instrument seriously. But when James finally gave in and gave the Fender Bass a go, everything in modern music would change, forever.

Jamerson took to the Fender bass immediately even though at first he still considered it somewhat of a novelty. Over time though he started to realize the potential of the electric bass. Suddenly the standard root and walking bass patterns that he was playing on upright seemed limiting on the Fender bass. James soon started adding melodic fills to his bass lines and then chromatic runs, ghost notes, and heavily syncopated sections. The Motown sound was the perfect blueprint for Jamerson to work with, and he quickly used the Fender bass to completely change the way the bass sounded in music.

The James Jamerson Bass: AKA The Funk Machine

After Jamerson’s 1957 Fender Precision was stolen, he picked up a brand new ’62 sunburst Fender Precision with a rosewood fingerboard. This bass would come to be known as “The Funk Machine”. The bass was completely stock with the foam mute and both the pickup and bridge covers in place. He used old, dead heavy-gauge La Bella flatwound strings, and the action was set so high that other bassists at the time have said that his bass was unplayable. But to James, it was no problem at all. With his extensive experience on double bass, Jamerson had extremely strong hands and the heavy strings and high action gave his Fender a powerful tone no one else had.

What’s even more amazing is that Jamerson played all these funky, complicated grooves with just one finger that he called “The Hook”. Listening now to such bass masterpieces like “Bernadette” and “Ain’t No Mountain High Enough,” it’s difficult to imagine how he could have pulled it off with just one finger. But it wasn’t only busy, complex lines that Jamerson was about. On “My Girl” he lays down one of the simplest yet effective bass grooves ever known, essentially two notes. James knew exactly what a song needed to make it work. And, if that meant just two notes, then that’s what he played.

Jamerson felt that the bassline should stand on its own and played it melodic but always in the pocket. His tone ranged from deep thudding lines to mid-range bark that cut through like a weapon. He never played a note he didn’t mean, there were no wasted fills and no fluff with James…every note mattered. His jazz background and deep understanding of the blues gave him the innate ability to add both sophistication and feeling to his grooves.

Sadly, during most of Jamerson’s career, he was virtually unknown to most people. This was mainly due to his contract with Motown. The agreement meant that he received no personal credits on the hundreds of songs he played on. Even other bassists didn’t know his name. However, they certainly knew his bass lines, and the influence on them was huge. It wasn’t until 1970 when he played on Marvin Gaye’s great album, What’s Going On, that he finally received a printed credit.

Soon after Motown moved to Los Angeles in 1972 Jamerson left and started doing session work for other artists. At that time his style and tone were out of fashion, and James found it difficult to get work. Unable or unwilling to change his bass playing for music producers, Jamerson became bitter and depressed. On August 2, 1983, he died of complications brought on by alcoholism that he struggled with for much of his life. He was only 47 years old. His famous “Funk Machine” Fender Precision was stolen shortly before his death, and to this day has never been found.

Jamerson wrote the book on electric bass. His amazingly creative bass lines, impeccable taste, and timing have never been equaled to this day. Every bass player since James Jamerson owes him a debt, and just listening to his playing can both teach and inspire.