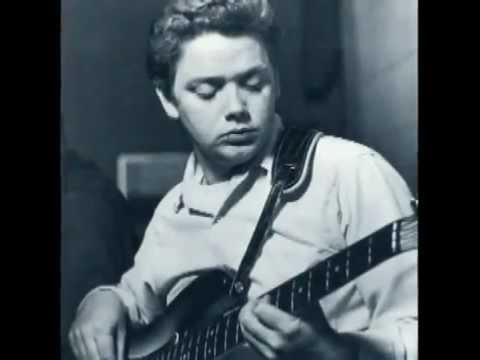 Donald “Duck” Dunn is one of my all time favorite bass players. There’s a deep, soulful feel to his deceptively simple bass lines.

Best known for his impeccable, rock solid bass playing with Booker T. & the M.G.’s, the house band for Stax Records all through the 1960’s.

A self-taught bassist, Duck had an innate musical sense and superb timing that always improved the song. He was the ultimate bass player’s bassist.

This low end legend has influenced thousands of bass players over the years, myself included. Born in Memphis, Tennessee in 1941 he got his nickname from his dad while they were watching Disney cartoons.

For most of his career Dunn played Fender Precision Basses strung with Labella heavy gauge strings. Early on he used what appears to be a mid 50’s single coil Precision with a one-piece maple neck. he soon switched to a sunburst 1958 Precision and later to a 59′-60 model with a rosewood fingerboard.

Duck Dunn started on guitar but later switched to bass after he decided that guitars had too many strings. He learned to play by grooving along with records, just filling in what felt right for the song. Steve Cropper has said that this is why Duck’s bass lines are so unique, no one ever told Duck how to play bass….he just figured it out his way.

Known for his simplified playing style, Duck understood that very often it was what you didn’t play that made the bass line work. Space was just as important to Duck as the notes themselves. It’s as if he was stripping the groove to its bare essentials so that the listener only got what was really needed. Duck always played for the song, never stepping on the other musician’s toes.

There was no fluff, no fancy fills with Mr. Dunn. He was quite simply the perfect pocket player, completely locked with the drums and rock solid on the beat while still managing to sound unique and able to put his own stamp on every groove.

I’m also a big fan of his strong, round, warm P-bass tone that’s still able to cut through the mix. You get the feeling listening to him play that he was almost always digging in and playing every note with authority. I would have to say that of all my favorite bass players and there are many, Duck Dunn is probably the one I try to sound like the most.

Duck Dunn has one of those sounds that seems to work with almost any style…..probably the ultimate bass sound. In my opinion, only the great James Jamerson can equal Donald Duck Dunn’s pristine tone. Duck Dunn became a highly session player and has played with some of the greatest musicians in history such as Otis Redding, Muddy Waters, Albert King, Eric Clapton, Neil Young, and of course The Blues Brothers, where he also played and acted in that now classic movie.

Duck even had the great honor of having his own signature bass released by Fender in 1998. Donald Duck worked with Fender to come up with a bass styled after his late 50’s Precision with a gold aluminum guard and maple neck just like the one he played for years with Booker T. & the M.G.’s.

Duck continued to play both sessions and live throughout his life. Sadly Donald Duck Dunn passed away while on tour in Tokyo with Steve Cropper on May 13, 2012. He will be sorely missed and remembered by all bass players as one of the greatest of all time.

Even to this day, Duck’s bass lines sound fresh and interesting, so do yourself a favor and check out the Duck if you’re not familiar with this bass legend. You’ll be very glad you did and your bass playing will benefit immensely from listening to this awesome musician.