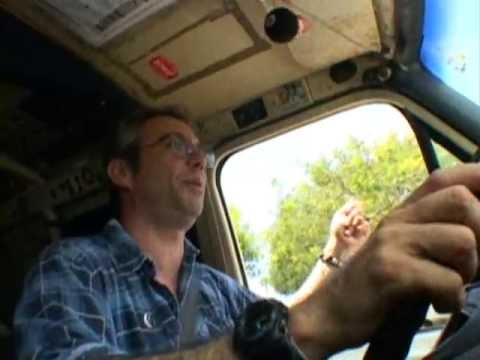 Mike Watt is one of the most important punk and post-punk bassists to ever wield the thud-staff. His influence is far-reaching in the bass community, and his status in punk rock history is legendary. Watt’s musical philosophy encompasses everything from punk rock to Bob Dylan to John Coltrane and beyond.

Mike Watt is also one of the most exciting and dynamic musicians to see live. No matter who he’s playing with, the shows are loud, they are chaotic, and they are pure genius.

Born in Virginia in 1957, Watt moved to San Pedro, California as a young boy. Not too long after arriving, he met the man who would become his best friend and bandmate, D. Boone. Boone was already dabbling with guitar, and with a little persuasion from Boone, Watt picked up the bass, which he refers to as the “thud staff.” Watt has stated in interviews that he didn’t even know what an electric bass was when he first started playing. To him, it was just the big guitar with four strings.

Mike Watt played several basses over the years, and while he’s well known for playing Gibsons since the 90s, he did play Fender Basses during his career as well. Most notably, he played a modified Telecaster Bass and several Fender Precision Basses. He’s also helped design his own signature bass from Reverend Musical Instruments called the “Wattplower.”

In the mid-1970s, Boone and Watt formed their first band, The Reactionaries, with George Hurley on drums and vocalist Martin Tamburovich. After a couple of personnel changes, the band eventually became the Minutemen with Boone, Watt and, Hurley.

In the early years, Watt used a modified Fender Telecaster Bass that he pummeled using many different unusual playing techniques. Slapping, popping, picking, and even striking the strings with his fist to get the sound he needed. The band was constantly evolving and so was Watt’s style. As their songs and music became more sophisticated, Watt’s bass playing became tighter and more focused. He was now using his finger-style technique almost exclusively as his bass lines incorporated more funk and soul elements. Watt’s eclectic bass playing can be best appreciated on their amazing 1984 album Double Nickels on the Dime.

The tragic end to The Minutemen

Tragically, the Minutemen ended abruptly when D. Boon was killed in a van accident on December 22, 1985. Watt was so despondent after Boon’s death that he contemplated quitting music altogether. After a period of grieving, he returned to music in 1986. Everything that Watt has done since D.Boon’s untimely death is dedicated to him. There’s a superb documentary about the Minutemen called We Jam Econo (2005) that I highly recommend.

Watt soon began working with his then-girlfriend Kira Roessler, who played bass with Black Flag for a time. Watt and Kira, who eventually married, recorded unusual instrumentals featuring only two bass guitars. Naming their band Dos, they released three albums and still perform to this day despite the fact that they divorced in 1994.

In 1986, Watt formed the band fIREHOSE with Hurley on drums and Ed Crawford on guitar. With fIREHOSE, Watt continued the funky, punk jazz, explorative music that he and Boon forged with the Minutemen. Releasing five albums and touring relentlessly, fIREHOSE achieved a strong following and high critical praise. Watt’s playing is outstanding on these recordings, and his songwriting was maturing as well.

After fIREHOSE broke up in 1993, Watt ventured on with a solo career. Using his remarkable bass chops and a powerful deep voice, Watt recorded Ball-Hog or Tugboat? He recruited several musician friends and vocalists for the project, including Eddie Vedder, Frank Black, Flea, Dave Grohl, Henry Rollins, Krist Novoselic, Nels Cline, Bernie Worrell, and many others.

Mike Watt’s bass playing had now evolved into a complex yet tightly centered style. His fingers moving all over the fretboard but always maintaining the groove and always serving the song. In 1997, he released his second album, Contemplating the Engine Room, a very personal album that used nautical themes to explore Watt’s relationship with his father and his days with The Minutemen.

Watt then developed a series of other band projects which allowed him to further explore his musical ideas. Working with musicians Nels Cline (guitar) and Kevin Fitzgerald (drums), Watt formed The Real Oh My. This group allowed Watt to stretch out his jazz-influenced jam versions of Stooges covers and other reworked classics. Banyan, originally formed by Stephen Perkins (Jane’s Addiction) is another band Watt plays with.

In 2000, Watt was rushed to the emergency room with a severe infection. After surgery, he was laid up for nine weeks and was unable to play bass. Watt slowly made his way back into music and began playing with the band Hellride as well as joining a world tour with J. Mascis of Dinosaur Jr.

Watt then began work on another solo project, The Secondman’s Middle Stand, which relates to his illness and recovery. It’s also inspired by Dante’s book The Divine Comedy. The album received very positive reviews, and Watt’s bass playing was superb and creative as usual.

In 2010, Watt released another solo effort Hyphenated-man, an album of 30 short songs based partly on the paintings of Dutch artist Hieronymus Bosch and ideas from the Wizard of Oz. This album represented a philosophy that was similar to his thinking during the Minutemen days by using several seemingly unrelated short songs to make up a larger connected idea. Like the previous two albums, Watt describes this effort as a sort of punk rock opera. The songs are energetic and full of emotion with Watt’s distinctive funk-fueled bass lines.

More side projects followed for Mike Watt, or as he likes to put it, “many in the pipeline.” He also says he plans to continue more solo efforts in the future. In 2012, Watt announced a fIREHOSE reunion for the Coachella Festival and a short tour.

Another of the high-profile, important gigs of his life was as the bass player for The Stooges. A lifelong fan of Iggy Pop and everything The Stooges did, he’s mentioned that he’s happy to be laying back and not being the leader of the band.

He also continues to host his own podcast The Watt from Pedro Show as well as constantly touring both with his own bands and as a sideman. Mike Watt shows no signs of slowing down and continues to proudly fly the flannel. We all look forward to seeing and hearing more from this living legend.